One of the oldest and most renowned secondary education institutions in Lithuania – Collegium Vilnense Societati Jesu – was established on 17th July, 1570. The first rector of the Collegium was Stanislaw Varszevicki SJ.

In 1757, after a devastating period of wars, occupations and plagues, the Jesuit College, located alongside Vilnius University, became a noblemen college (collegium nobilium). The college was relocated to the land beside the Church of St. Casimir and Jesuit monastery, donated by a flag-bearer Kazimierz Szyszko.

After the suppression of the Society of Jesus in 1773, the buildings were neglected, and during the Rule of Russian Empire, used as barracks.

The preparations for reopening of the school began in 1918, when the Bishop of Vilnius Jurgis Matulaitis-Matulevičius assigned this task to a German Jesuit Friedrich Muckermann.

After the Polish forces drove away the Bolshevik forces from Vilnius in April 1919,  the Polish Jesuit province settled near the Church of St. Casimir.

In 1921, the Jesuit province opened a boy‘s gymnasium in the old noblemen buildings. During the first years, it had 135 students.

In 1938–1939, the gymnasium had 580 students. As Lithuania regained Vilnius, the Superior-General of the Society of Jesus W. Ledóchowski issued a decree ordering the Lithuanian Jesuit Provincial superior to take over the jurisdiction of the gymnasium.

In 1939–1940, before it was disrupted by the Soviet occupation, Vilnius Jesuit High School was a subsidiary of Kaunas Jesuit High School. During the postwar period, an all-boys school was opened in the Jesuit school property, which later on was reorganized to Antanas Vienuolis progymnasium.

The reconstruction of the school began in 1982, and was not finished. 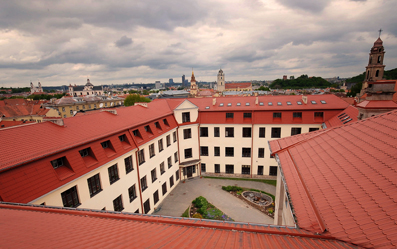 On 11th November 1994, Vilnius City Council returned the property to the legitimate owners. The gymnasium establishment initiative group was formed during the same month.

In February 1995, Lithuanian Jesuit Provincial superior J. Boruta S.J.  appealed to the Archbishop Metropolitan of Vilnius A. J. Bačkis, requesting approval for the restoration of the gymnasium.

The Archbishop Metropolitan of Vilnius gave approval in the decree of June 19, 1995. School was reopened on 11th September 1995, with 336 students and 54 teachers, classes 5 through 11.

On the 1st September 1996, advanced humanitarian profile status was granted to 9th form of the gymnasium. The school began teaching advanced level Lithuanian, German and English.

In 1995–2003, the principal of the gymnasium was Father Antanas Gražulis.  “Dear students, on behalf of our community, I am assuring you, that you are loved here, we will help you and serve you (but we will not be subservient – it is not the principle of S.J.)”

In 1997, a mixed youth choir was established on Father A. Gražulis initiative. A Lithuanian conductor Leonidas Abaris was invited to work with the student members of the choir. Throughout the years, the choir had more than 50 choristers.

On 25th November 1997, the Lithuanian and Latvian Jesuit province bought a land alongside Guopstų lake in Guopstos, Trakai municipality, and established a gymnasium campground.

After Father A. Gražulis left to USA in 2003, history teacher Faustas Meškuotis became the new principal of the school.

In 2004–2011, the principal of the school had been Jesuit Brother Virgilijus Saulius. “The school is developing and it will continue to do so. The aim for perfection sometimes shatters to pieces, but then you glue it together again.”

In September 2005, Vilnius Jesuit High School was celebrating 10 years since reopening. For this occassion, the school organized an International Science Conference “Jesuit Education: the Past and the Present”, and held a student concert in Lithuanian National Philharmonic.

The cooperation with Vilnius University began on 4th March 2006. The agreement was signed by VU rector Benediktas Juodka and the principal Virgilijus Saulius S.J.

On 5th October 2006, the gymnasium opened a long-awaited Sports and Arts center. The opening ceremony began with a blessing for the new building, given by a Jesuit Provincial superior Aldonas Gudaitis S.J.

In summer of 2007, the school‘s campground opened a new building for extracurricular activities.

In April 2009, Vilnius Jesuit High School became part of the “Schools: Partners for the Future” (PASCH – Partnerschulen der Zukunft) initiative of the Federal Republic of Germany, with nearly 1500 schools throughout the world.

On 4th March 2010, the school celebrated 15 years since reopening with a student concert “Art Polemic with Listeners” in Lithuanian National Philharmonic.

On 23rd December 2011, Father Artūras Sederevičius S.J. became a principal of the school. “During the rapid technological advancement, I encourage you to remember that the core values of life are spiritual strength, and connection with the Creator and supporter – the Lord.“

English
© 2022, Vilnius Jesuit High School. All rights reserved. Copying content without the written consent of the school is strictly prohibited.